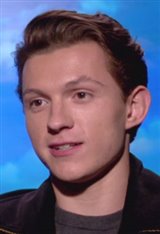 Born in Kingston-upon-Thames, Surrey, England, Thomas Stanley Holland is a British actor/dancer who first gained fame for his role in the stage musical Billy Elliot the Musical at the Victoria Palace Theatre, London. The son of Nicola Elizabeth and Dominic Anthony Holland, a comedian and an author, Tom lives in Kingston-upon-Thames with his family, including brothers Sam, Harry (who are twins) and Paddy. He has studied at Wimbledon College and began a two-year program in the BRIT School for... See All