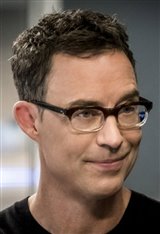 Born in Ottawa, Ontario, Tom Cavanagh graduated with degrees in English, Biology, and Education before moving to New York City to study at the acclaimed HB Studio. He began his acting career in Canada in theater (including a 1989 Broadway-bound revival of Shenandoah starring Hal Linden that debuted in Toronto) and commercials, including several TV ads for Labatt's Blue that made him a familiar face in Canadian households. Appearing with long hair, sitting on a dock by a lake, he became famous... See All