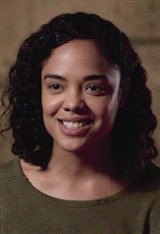 Although Tessa Thompson was born in Los Angeles, she split her time during her childhood between California and Brooklyn, where her father Marc Anthony Thompson, of the musical collective Chocolate Genius, Inc, was living.

Tessa’s first major role was in a 2002 production of The Tempest produced by Los Angeles’ Women’s Shakespeare Company. The following year she starred as Juliet in Romeo and Juliet: Antebellum New Orleans, for which she earned a nomination for a NAACP Theatre Award.

Of this period in her career Tessa told Vogue, “When I was doing a lot of Shakespeare, my dream was to do a period piece, but I thought there’s no way that I’m going to have the career that Kate Winslet has because of the way I look.”

Tessa is multiracial and has built her career on playing strong black women. She played Samantha White in Dear White People (2014) and the same year, played a role in Ava DuVernay’s Selma, for which she won a Breakthrough Performer award at the Hamptons International Film Festival.

Tessa also starred in Creed(2015) as Bianca. In an interview with The Cut in 2016 she explained part of what drew her to the role, saying, “I love that you get to see a black man be sensitive and vulnerable — and seeing a black woman demand those things of him. As millennial love is not women waiting at home but being just — as if no more — ambitious, and showing how it works when two people are after something.” For her role in the boxing movie, she won several awards from Film Critics Associations, including Best Supporting Actress from the African-American Film Critics Association (AAFCA), the Black Reel Awards and from the Black Film Critics Circle Awards. She also won Outstanding Supporting Actress in a Motion Picture at the Image Awards. Tessa went on to reprise the role in Creed II (2018).

Tessa is also a vocal supporter for human rights, posting on social media regularly about equality and systemic racism, and pictures of people of color killed by police violence. She has spoken on numerous occasions about creating more multidimensional roles for people of color showing real people and not offensive stereotypes.

Tessa was the recipient of some hate when she was cast as a Valkyrie in Thor: Ragnarok, which is based on the comics and Norse mythology. Her character was depicted in the comics as a blonde-haired and fair-skinned woman. She told comicbook.com: “People were posting about sort of the race swap and the implications of that and they were very upset. Some very upset people about how this doesn't honor Norse mythology and you're like 'Read Norse mythology, it doesn't make sense.'" Tessa also joked about how "Idris Elba needs company, he can’t be the only black person in the neighborhood." Despite the controversy, Tessa received nominations for her work in the film from several associations such as the Academy of Science Fiction, Fantasy & Horror Films and the Teen Choice Awards.

In the sci-fi thriller Annihilation (2018), she played Josie alongside Natalie Portman and Jennifer Jason Leigh and in Sorry to Bother You (2018), she played Detroit, the girlfriend of the lead character played by Lakeith Stanfield. She received co-starring lead status when she played Agent M opposite Chris Hemsworth in Men in Black: International(2019).

In 2017, she was named "Woman of the Year" at the Elle Women in Hollywood Awards and in 2018, she was given the "EE Rising Star Award" at the BAFTA Awards.

When she’s not on set, Tessa is also a musician and singer who plays in a band called Caught a Ghost and she also shared a Seattle Film Critics Award with co-writer Ludwig Göransson for "Best Music, Original Song" for the song "Grip" in Creed (2015).