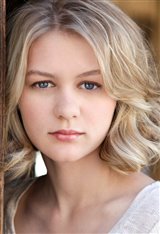 Ryan Simpkins was born in Manhattan, New York and is the older sister of fellow actor Ty Simpkins.

Having begun her career in commercials and music videos, Ryan was just five years old when she made her TV debut in the Toronto-filmed movie Fallen Angel (2003) starring Gary Sinise and Gordon Pinsent. A guest appearance on the TV series Law & Order followed in 2004 and in 2005, she filmed her first feature, the indie film Sherrybaby alongside acting heavyweight Maggie Gyllenhaal. The movie released in 2006, the same year Ryan made her Broadway debut, in Festen at the Music Box on West 45th Street.

When the production came to an end, Ryan’s family moved to California to advance their childrens’ careers. Ryan would continue to nab roles that would allow her to work with some of Hollywood's most talented actors. In 2008, she would star in Guardians of the Night with acclaimed actor John Malkovich.

That same year, the young actress expanded her resumé with films such as Surveillance, which earned her the award for Best Actress at the New York City Horror Film Festival, as well as Pride and Glory, which found her co-starring with veteran actors Edward Norton and Colin Farrell. She also starred in the 2008 Oscar-nominated film Revolutionary Road alongside acting phenoms Kate Winslet and Leonardo DiCaprio.

Ryan would hit a lighter note in her next film with the 2009 comedy Gary the Tennis Coach. But that same year, she would get back to roles in more serious films such as A Single Man. The Oscar-nominated movie was directed by Golden Globe-nominated Tom Ford and had a star-studded cast that included Colin Firth, Julianne Moore and Nicholas Hoult.

Indeed, Ryan's ability to hold her own with Hollywood's best has only helped to increase her credibility as a talented young actress. She would continue to steadily star in films from 2010 through to 2016. While most of her biggest roles were in more dramatic features, 2017 saw Ryan get a great opportunity to work with Hollywood’s finest comedic actors when she would play the daughter of Will Ferrell and Amy Poehler in the comedy The House.

Not just a talented actress, Ryan has also worked as a director, producer and writer on various film shorts, which includes Sitters Street in 2010, 1426 Chelsea Street in 2012 and Because It Mattered (2015).

Currently, Ryan is studying film at the University of California, Berkeley.