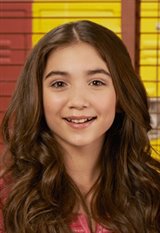 A Los Angeles native, Rowan began acting an early age — five, to be exact. In 2010, she was cast as Mona’s (Michaela Watkins) daughter in the romantic comedy The Back-up Plan, starring Jennifer Lopez. She also gained valuable experience in front of the camera playing Caitlin on 10 episodes of the Disney Junior Channel show Dance-A-Lot-Robot, a show that ran three minutes and would play in between longer shows on the network. The following year, she played Rebecca Wilson in Spy Kids: All the Time... See All