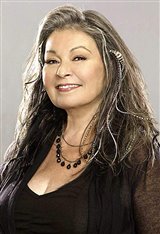 Born in Salt Lake City, Utah, Roseanne would entertain her family on Friday evenings when they would gather in her grandmother's apartment for Sabbath dinner. She attended Salt Lake High School East, but dropped out before graduating and at the age of 18 she moved to a Colorado hippie commune, got married, and had three kids. They moved to Denver where she became a struggling mother working as both a cocktail waitress and window dresser.

Her wit and funny insights inspired friends and patrons to suggest she become a stand-up comic, and within a few years she became one of the most popular comics in Denver. By 1983 she moved to Hollywood where she quickly found work on the television special Funny.

The special led to an appearance on The Tonight Show and ultimately the sitcom she became famous for, Roseanne. Based on a regular not-so-perfect working-class family, Roseanne became a hit and remained on air for the next nine years. It also garnered her many nominations and wins from the Emmys, Golden Globes and American Comedy Awards.

During the course of the show, the many changes in Roseanne's personal life were reflected on the air. When she underwent breast reduction surgery, her character did too. When she married Tom Arnold in 1990, he became a part of her show and she proudly billed herself as Roseanne Arnold.

Immediately after Roseanne finished its run in May 1997, Roseanne quite literally flew to embark on a new challenge, portraying The Wicked Witch of the West in the Madison Square Garden production of The Wizard of Oz.

Roseanne then signed a deal to develop a syndicated daily talk show for the fall of 1998 called The Roseanne Show. Her daughters Brandi, Jennifer and Jessica Pentland all worked with her on the talk show.

While working in television, Roseanne has made the occasional stab at feature films, such as She-Devil (1989), Look Who's Talking Too (1990), Even Cowgirls Get the Blues (1993), and Joe Dirt (2001), but has yet to find the role that will make her an A-list feature film star.

In 2018, ABC rebooted the Roseanne show, bringing back all the original characters. By May of the same year, the series was cancelled following a tweet by Roseanne, saying former Obama aide, Valerie Jarrett, as looking like the offspring of the "Muslim Brotherhood & planet of the apes."

The show was quickly revamped with a new title, The Connors, debuting in October 2018, which features the entire family, minus Roseanne.

In addition to acting, Roseanne's autobiography, Roseanne: My Life As A Woman and My Lives established her as a bestselling author.