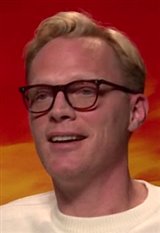 Trained in his native England at the Drama Centre in London, Paul Bettany started his professional acting career onstage in plays like An Inspector Calls, One More Wasted Year and Love and Understanding.

He landed his first role in British television in 1997 with the telefilm, Sharpe's Waterloo. That same year he made his feature film debut in the film Bent playing Captain. Other film and television stints would follow, but it wasn't until Gangsters No. 1 that people started to take notice. For his role, he received nominations from the British Independent Film Awards and the London Film Critics Circle Awards.

Following this strong showing, he worked with Sally Field and Michael Richards in the telefilm David Copperfield. For the start of the new millennium he completed six films including Kiss Kiss Bang Bang, A Knight's Tale playing Geoffrey Chaucer and A Beautiful Mind (2001) opposite Russell Crowe. While filming A Beautiful Mind, Paul met and fell in love with co-star Jennifer Connelly, and the two were married in January 2003. Later that year, Jennifer gave birth to their first child, a boy they named Stellan. In 2011, their daughter Agnes was born.

Paul had the chance to work with his good friend Russell Crowe again in Master and Commander: The Far Side of the World (2003), and received a BAFTA nomination for his role as Dr. Stephen Maturin. Later, he played the plum role of the albino monk Silas in the highly-touted The Da Vinci Code (2006), starring Tom Hanks.

In 2010, he was seen in several films, including The Tourist, starring alongside Angelina Jolie and Johnny Depp, Legion and Iron Man 2.

He then starred in a slew of action films, including Transcendence (2014) alongside Johnny Depp, and played Vision in Avengers: Age of Ultron (2015), reprising the role in Captain America: Civil War (2016) and in Avengers: Infinity War (2018).

Most recently, he played the title role of a gay man who has never come out to his family in Uncle Frank (2020). He also reprised his role as Vision for the Disney+ series, WandaVision (2021).