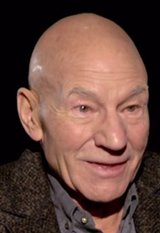 Born in Milford, Yorkshire, Patrick Stewart was performing in various drama groups by the age of twelve. Leaving school at 15, he went to work as a junior reporter for a local newspaper but was told he was spending too much time at the theater, and not enough time on the paper. He quit and began working as a furniture salesman to pay for drama school.

In 1957, he was accepted at the Bristol Old Vic Theatre School, and two years later made his professional stage debut in a production of Treasure Island. Patrick went on to enjoy a prolific and acclaimed stage career, joining the Royal Shakespeare Company in 1966 and remaining with it for the next 27 years.

It wasn't until the 1980s that Patrick began to work in film and television. Some of his first attempts included popular films like Excalibur (1981) and Dune (1984).

Although he was well-known, his fame would be nothing compared to what a sci-fi television series had in store for him. In 1987, he was chosen to play Captain Picard on Star Trek: The Next Generation. Rumor has it that he was originally considered for the role of the android, Data.

Certain that he would be fired from the series, Patrick reportedly refused to unpack his bags for six weeks. The show was a hit, and Patrick stayed with Next Generation for seven seasons. After the show ended, Patrick reprised his role for a string of successful Star Trek films: Star Trek Generations (1994), Star Trek: First Contact (1996) and Star Trek: Insurrection (1998).

In addition, Patrick continued to work on the stage and in various films. In 1995, he had a hilarious turn as a flamboyant, acid-tongued interior decorator in Jeffrey, while in 1997, he tried his hand at intrigue with a part in The Conspiracy Theory.

The following year, he appeared again on the small screen, giving a terrific portrayal of the obsessive Captain Ahab in Moby Dick. On stage, Stewart enjoyed acclaim for a number of productions, particularly A Christmas Carol, which he performed both on Broadway and the London Stage, winning a 1993 New York Theatre Critics Drama Desk Award and a 1994 Olivier Award. He also earned extensive praise for his portrayal of Prospero in the 1996 Broadway production of The Tempest.

In 2000, Patrick decided to start off the millennium off with a bang, landing a role in the big budget sci-fi/fantasy film, X-Men. He played the telepathic, paraplegic leader, Professor Charles Xavier, of the mutant team, reprising the role in X2: X-Men United (2003) and X-Men: The Last Stand (2006). More recently, he lent his voice to the animated film Legends of Oz: Dorothy's Return (2014) and even returned to the X-Men franchise with the 2014 film X-Men: Days of Future Past.

Patrick's latest credits include the thriller Green Room (2015) with Anton Yelchin, the mini-series Oscar's Hotel for Fantastical Creatures (2015), the comedy Christmas Eve (2015), the Golden Globe-nominated comedy series Blunt Talk (2015-16), and the action drama Logan (2017), in which he reprises his role as Charles Xavier alongside Hugh Jackman's Wolverine. He also voiced the part of The Captain in the animated adventure comedy Spark: A Space Tail (2017) as well as the voice of Poop in The Emoji Movie (2017).

Most recently, he played Bosley in the reboot, Charlie's Angels (2019), directed by Elizabeth Banks and starring Kristen Stewart, Naomi Scott and Ella Balinska.

On September 7, 2013, Patrick married for a third time, this time to vocalist Sunny Ozell.

A devoted father, Patrick decided not to attend the Star Trek 50th Anniversary show, so that he could celebrate his son's birthday in England.