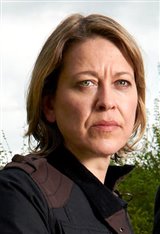 Actress Nicola Walker was born in Stepney in the East End of London, England.

At age 12, she took acting lessons in order to overcome her shyness with boys. It soon became clear that she had a natural talent. Later on, she studied English at Cambridge University and after graduation she was offered a place at the Royal Academy of Dramatic Art, but turned it down because she'd already landed an agent and several roles.

In 1994, Nicola played a small role in Four Weddings and a Funeral (1994), followed by the role of Sallie Grace on the mini-series Faith, and the role of Colette Brustein in the TV movie Milner.

Although she played recurring and regular roles on a number of series over the next few years, including Suzy Travis on Chalk (1997), Harriet Ambrose on The Last Train (1999) and D.I. Susan Taylor on Touching Evil (1997 - 1999), it was in 2003 when she joined the second season of David Wolstencroft’s BBC espionage drama Spooks in the role of Ruth Evershed that she gained wider attention. She remained on the show for eight years.

After that, Nicola was persuaded to audition for the role of Gillian, a Yorkshire sheep farmer on the series Last Tango in Halifax, opposite Derek Jacobi as her father. The role couldn't have been more different from her role on Spooks and she was thrilled when she landed the role. Over the eight-year run of the series, which began in 2012, she received two BAFTA Award nominations.

Because one season of a British television series has much fewer episodes than an American one, in 2018, she was able to also accept the starring role of DCI Cassie Stuart on the ITV crime drama series Unforgotten. The show, about a police team that investigates cold cases when bones are discovered, has enjoyed three seasons to date; two that aired in 2018 and the third in 2019.

During that same time, she starred as Hannah Stern on the BBC series The Split, a show about divorce lawyers. The first season aired in 2018, and the second one in 2020.

Nicola is married to fellow actor Barnaby Kay, whom she met in 1994 while they were both appearing in The Libertine at the Royal Court. They live in the Essex countryside with their son, Harry.