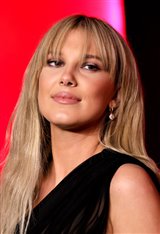 English actress Millie Bobby Brown was born in Marballa, Spain to British parents who moved to Orlando, Florida when she was seven years old. She is the third of four children. Upon moving to Florida, Millie began attending acting workshops, where she was scouted by a Hollywood talent agent who advised her parents to encourage a career in acting.

Millie made her acting debut in 2013 at the age of nine on the television series Once Upon a Time in Wonderland. In this spinoff of the Once Upon a Time series, Millie played a young Alice for two episodes. Following this, she appeared in a main role on the series Intruders in 2014 for eight episodes and had a brief stint on NCIS that same year.

She also had small roles in Modern Family and Grey's Anatomy before achieving her most popular and critically acclaimed role yet as Eleven on the Netflix series Stranger Things, which is currently filming its third season. For her performance, she has earned several award nods, including an Emmy nomination for Outstanding Supporting Actress in a Drama Series.

In addition to television, Millie made the move to film with her theatrical debut in the monster flick Godzilla: Kind of the Monsters (2019) and its sequel, Godzilla vs. Kong (2021).

Millie is the youngest person ever to be named as one of the world’s 100 most influential people by TIME magazine, where she appeared alongside the likes of Prince Harry, Shawn Mendes, and Rihanna.

Millie was looking for a British character to play when her older sister, Paige Brown, discovered the ​Enola Holmes mystery series. The sisters showed the books to their parents, who had started a family production company, PCMA Productions (named for their children Paige, Charlie, Millie and Ava) and they were eventually able to convince Legendary Pictures, the studio behind the recent ​Godzilla ​franchise, to produce the film, titled Enola Holmes (2020). Netflix picked it up, and it debuted on the streaming service in September 2020. In addition to Millie as the teenage sleuth, it stars Henry Cavill as her older brother Sherlock Holmes and Sam Claflin as the eldest Holmes brother, Mycroft. Helen Bonham Carter plays their mother, Eudoria.

When she's not acting, Millie trains as a boxer. She's deaf in one ear after being born with partial hearing that was gradually lost over the years. She currently divides her time between London and Atlanta, Georgia.