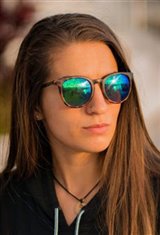 Madison Stewart is known to her friends as "Pip" (dad’s a pirate, mum’s a hippy, so she became "Pippy"). She has always grown up in the oceans, living on a yacht form the age of two and then growing up on the waters of Australia’s Gold Coast. At 12 years of age Madison was a certified Open Water diver at Sundive in Byron Bay, and at age 14 she picked up an underwater camera for the first time. Everyone has a special memory of wonder from their childhood—Madison’s obsession quickly became the... See All