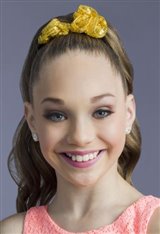 Most stars break out by developing a thick skin, persevering in the wake of countless rejections and developing a deep body of work that leads to a career-making gig. Maddie Ziegler, though, had the luxury of being offered a part in a pop star's music video.

Maddie, whose birth name is Madison Nicole Ziegler, was born in Pittsburgh, Pennsylvania. From an early age, she gravitated towards performing. Her first passion was dance.

Years after she was an established child star, she spoke with the Telegraph U.K. in May 2015 and revealed that she delivered her first performance when she was just two years old. It was a Nutcracker recital and she instantly knew dance was an artistic avenue she needed to pursue.

At her insistence, Maddie was enrolled in dance classes with her younger sister Mackenzie. She flourished, and when she was eight years old, ended up on the hit Lifetime reality show Dance Moms. The program premiered in 2011 and profiled the early careers of young dancers under the watchful (albeit demanding) eye of Abby Lee Miller. It also tracked the interaction between Miller and the dancers' bickering mothers.

The show polarized audiences. Some felt Miller was abusive, while others enjoyed what they interpreted as an insider's look at the rigorous training required to excel in the dance world. Whichever was true, the program did catch the attention of Australian singer-songwriter Sia, who was particularly moved by Maddie's dance ability.

As Maddie shared in her Telegraph U.K. interview, Sia spotted Maddie on the show and via a tweet, invited her to dance in one of her upcoming music videos. Maddie assumed it was a joke, but eventually she was dancing in front of cameras on the "Chandelier" shoot. Since then, she has danced in a number of Sia's videos, including "Elastic Heart," "Big Girls Cry" and "Cheap Thrills."

In the music video for "Elastic Heart," Maddie was paired with actor Shia LaBeouf. The video sparked controversy when it was released as some viewers read the relationship between Maddie and the much older Shia as inapporpriate. Sia issued an apology in response.

Together, Maddie and Sia have performed on Jimmy Kimmel Live!, SNL, The Ellen DeGeneres Show and on stage at the Grammys.

Her film credits include Ballerina and The Book of Henry, both 2017 releases. In the animated adventure flick Ballerina, Maddie voices the character Camille Le Haut. Elle Fanning and Dane DeHaan also lend their voices to the film. In the drama The Book of Henry, she plays Christina Sickleman alongside Naomi Watts, Jacob Tremblay and Sarah Silverman.

Maddie's dance routines have won her recognition on several fronts. In 2015, she was nominated for Choice Dancer at the Teen Choice Awards. A year later, she won the trophy. Also in 2016, she picked up the DailyMail.com Seriously Popular Award at the People's Choice Awards.

A self-proclaimed "perfectionist," Maddie discussed fame with the Telegraph U.K. and shed light on how she feels about getting noticed in public. She said, "I don't feel normal anymore because I get recognized, even when I'm just trying to have fun or going to get ice cream with my friends. People go crazy and it gets overwhelming."

In the same interview, she also admitted that she has aspirations of becoming "a triple threat" and that sports are not her forte. She said, "I'm not sporty at all. I can barely catch a ball. My stepbrothers try to teach me hockey but I'm horrible at it."

In March 2017, Maddie released a book called The Maddie Diaries: A Memoir, which explores her dance experiences and offers insight into what life on Dance Moms truly entailed.