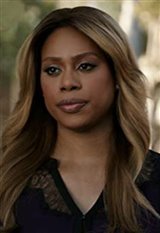 Laverne Cox is a three time Emmy-nominated American actress best known for her role as Sophia Burset on the hit Netflix series Orange is The New Black. She is also the first openly transgender actress to be nominated for an Emmy Award in any acting category. Born in Mobile, Alabama, Laverne has a twin brother, Reginald, who is a composer/artist known as M. Lamar, who identifies as queer. Reginald made a cameo in Orange is The New Black as a pre-transition version of Laverne's character, Sophia... See All