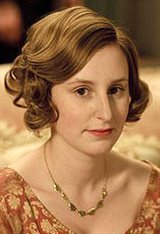 Laura Carmichael rose to stardom as the reserved, often overlooked Lady Edith Crawley on the hit PBS drama Downton Abbey. But if her work since then is any indication, she has a lot more to offer.

Born in Southampton, England, Laura quickly developed an interest in acting and pursued it all the way to Bristol Old Vic Theatre School, from which she graduated in 2007. Shortly after school, she was working as a receptionist and making plans to tour with a production of Shakespeare's Twelfth Night when she was asked to read for a part on a period piece called Downton Abbey. She eventually won the role of Edith and was catapulted to fame.

Laura portrayed Edith in all 52 episodes of Downton, which ran from 2010 to 2015. Among its many honors, the series picked up 15 Emmys and three Golden Globes, as well as three Screen Actors Guild awards for Outstanding Cast. It was created by Julian Fellowes and co-starred Hugh Bonneville, Michelle Dockery, Joanne Froggatt, Elizabeth McGovern and Maggie Smith.

While discussing the show with ELLE.com in September 2016, Laura said, "It was a really wonderful show for female characters. I feel really lucky to have been given the chance to have such a great role. We're in a time where parts for women are becoming really interesting and exciting, and people are having the confidence that women can lead shows." She also explored the character of Edith when she said, "I was really pleased that, with all of the love story for Edith, that she also had this other level to her — she was the career woman and a mother... The fact that it ended with a real romantic love for her was the thrill that we all needed, but she would have been all right, do you know what I mean?"

Forever grateful for her involvement in the series, she told ContactMusic.com in October 2016 the following: "I've been very lucky, I think, to have done six years on something and come out feeling that the world's [my] oyster, really. I feel that I've had another six years' training!"

In 2014, she returned to the big screen as Henriette in Madame Bovary. The 2014 drama stars Ezra Miller and Mia Wasikowska. One year later, she stepped into the role of Seph in the indie drama Burn Burn Burn, which follows two friends (Laura and Chloe Pirrie) as they embark on a road trip to scatter the ashes of their recently deceased pal Dan.

In 2016, Laura made her way back to TV as Maddy Stevenson. She acted in four episodes of the gritty crime thriller Marcella, which follows a vicious serial killer on the loose.

The same year, she played a role in the biopic A United Kingdom (2016) with David Oyelowo, Rosamund Pike and Tom Felton. The film tells the story of Prince Seretse Khama of Botswana (Oyelowo) and his controversial marriage to a white woman named Ruth Williams (Pike) in the '40s. Laura plays Muriel Williams, Ruth's sister.

Outside of her work, Laura is close friends with her Downton co-star Michelle Dockery. She told The Telegraph in April 2016 that Michelle is "a wonderful person" and that they connected because they "went to similar drama schools, so from the first day [they] worked in a similar way." Due to the fact that both women have two sisters, Laura also said they've "always bonded."

In August 2016, Laura went public with another relationship that she cultivated from her Downton days when she and British actor Michael Fox stepped out as a romantic item for the first time. Michael played servant Andrew Parker in the fifth and sixth seasons of the proclaimed series.

Laura returned to her role as Edith Crawley in the big screen sequel to the popular series, Downton Abbey (2019).

Laura, who currently resides in her Camden flat in northwest London, has become somewhat of a style icon. In an interview with ELLE.com in January 2014, she said, "I've been really lucky because I've managed to become wonderful friends with a handful of very talented British designers. Christopher Kane has become one of my very good friends — also Erdem. Jonathan Saunders is another brilliant talent who's very kind. We all hang out."