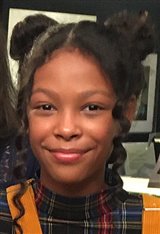 Born in Miami, Florida, Kyliegh Curran began her career onstage at the age of seven, appearing in local productions. At the age of 10, she was cast in the role of young Nala in the Broadway production of The Lion King. She made her motion picture debut in the thriller Doctor Sleep (2019), co-starring alongside Ewan McGregor. Kyliegh, who is concerned about the environment, is a vegan. She likes to write, bake and garden in her spare time. See All