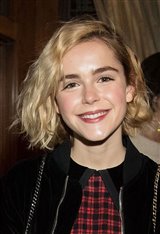 Kiernan Brennan Shipka was born in Chicago, Illinois, one of two daughters, and was six years old when her family moved to Los Angeles to encourage her acting career.

Prior to this, Kiernan made her start with commercial print modeling before the move to L.A. opened up new doors for her, and she found herself appearing on such shows as Monk and Cory in the House before she eventually landed a reoccurring role as Sally Draper on Mad Men from 2007 until the show finished in 2015. She won several awards for her performance, including a Screen Actors Guild award for Outstanding Performance by an Ensemble in a Drama Series.

During her time on the show, Kiernan continued acting in other roles and appeared on such shows as Don’t Trust the B in Apartment 23 and Unbreakable Kimmy Schmidt. She also played in several movies such as the made-for-television film Flowers in the Attic (2014) with Heather Graham and One and Two (2015) with Timothée Chalamet. Currently, Kiernan stars in the Netflix series Chilling Adventures of Sabrina as Sabrina Spellman.

Kiernan cites such movies as Wizard of Oz, Sound of Music and Harry Potter has having inspired her in her acting career. In addition to her talents in front of the camera, she also has a black belt in taekwondo.