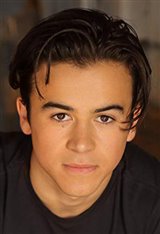 Keean Manny Johnson was born in Colorado. He was homeschooled, alongside his younger brother, Cade, and took dance lessons from the age of five.

He was performing in the play Plainsong at the Denver Center for Performing Arts in early 2008 when casting director Nora Brennan took notice of the 11-year-old boy and asked him to audition for the Broadway production of Billy Elliot - The Musical. He did, and landed a role as the understudy for Michael.

Keean and his family moved to New York City for rehearsals and by the time the musical opened in November 2008, Keean was 12. In September 2009, he was upgraded to the role of Michael and would perform over 300 times on Broadway before traveling to Chicago to perform the same role in 2010.

There he was noticed by casting director Claire Simon, who encouraged him to move to Los Angeles to further his acting career. His entire family, who was supportive of his career, moved and Keean soon landed a starring role as Adam Freeman in The Hub Network’s fantasy adventure series Spooksville, which ran from 2013 to 2014. He would continue to work on TV with a recurring role as Tom on ABC’s The Fosters, the role of Colt Wheeler on the hit CMT TV series Nashville, as well as Hulu’s Guidance.

His upcoming projects include the Mark Amin-directed drama Emperor, based on the life story of Shields Green; the Roland Emmerich war drama Midland, the horror thriller We Summon the Darkness alongside Alexandra Daddario, Johnny Knoxville and Logan Miller; and the RZA-directed crime drama Cut Throat City.

When not acting, Keean enjoys traveling, surfing and photography.