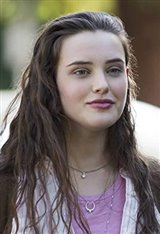 Born in Perth, Australia, Katherine Langford has always had a passion for the creative arts. She began voice lessons in 2005, training in classical, jazz, and contemporary. She studied music and drama in high school at Perth Modern School, where she was also a nationally ranked swimmer. Along with her love for musical theater, Katherine was also was interested in medicine and politics.

That changed in 2012 when she was 16. After seeing Lady Gaga live in concert, Katherine decided to focus on music and began teaching herself to play piano. For her final year of school, she stopped swimming to focus solely on performing. She appeared in a number of musical and drama competitions that year, including her school’s 2013 production of the Australian play, Hotel Sorrento, playing the role of Meg Moynihan.

Katherine graduated high school in 2013 with a diploma of musical theater. She applied to several acting schools, but was rejected, so she began acting classes and workshops in Perth, juggling three jobs and working towards getting an acting agent. In 2016, she was finally offered a spot at the Western Australian Academy of Performing Arts for acting but never enrolled, instead deciding to pursue more professional roles.

She first appeared in several independent films, including the short films Story of Miss Oxygen (2015) and Imperfect Quadrant (2016). She also played the lead in the short film Daughter, which debuted at the 2016 Cannes Film Festival.

Her breakthrough role was in the Netflix original series 13 Reasons Why, based on the novel of the same name. Katherine auditioned for the roles of both Hannah and Jessica over video chat and was chosen to play Hannah Baker. She received a Golden Globe nomination for Best Performance by an Actress in a Television Series - Drama for her performance in the first season. Hannah only appeared in the first two seasons, as Katherine decided to step away from the show, saying she felt Hannah’s story had been fully told.

After saying goodbye to her first major role, Katherine went on to star in several feature films, including the Australian film The Misguided (2018), followed by roles in the American films Love, Simon (2018), and Knives Out (2019). She was also cast in Avengers: Endgame (2019) as the teenaged version of Tony Stark’s daughter, but her scenes were cut out of the final film.

She also plays the starring role of Nimue in the new Netflix series Cursed and stars as a girl whose fellow high school students are exploding in Spontaneous (2020).

Katherine's younger sister, Josephine Langford, followed in her footsteps, and is best known for her lead role as Tessa Young in the movie After (2019).