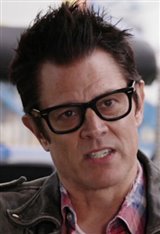 Born in Knoxville, Tennessee, Johnny stared death in the face at an early age when he suffered from a bout of flu, pneumonia and bronchitis simultaneously. The experience led him to work on a number of life threatening stunts, which would later inspire him to create a series that displayed his invincibility. After graduating from high school at age 18, he moved to California to attend the American Academy of Dramatic Arts in Pasadena on a scholarship.

But his education there was to be shortlived, and he dropped out just weeks after beginning his course. His interests focussed on his future wife, Melanie, a clothing designer. Following the wedding, and the birth of their daughter, Madison, Knoxville supported his family by working on commercials. He also worked as a freelance writer for a skateboarding magazine called Big Brother.

While writing an article about self-defence equipment, Knoxville decided to test out the equipment himself and his editor agreed to film the extreme tests. From that footage, Knoxville's series Jackass was born.

The show became a hit, giving him enough exposure to land roles in feature films like Coyote Ugly (2000), Deuces Wild (2002), and Big Trouble (2002). Although his roles in the big budget films remained minor, he was given the chance to become household name when his series turned into a feature film in 2002, entitled Jackass: The Movie (2002).

He has since gone on to play supporting roles in films such as Walking Tall and A Dirty Shame (both 2004), followed by starring roles in The Dukes of Hazzard and Daltry Calhoun (both 2005). He also starred in the 2013 film The Last Stand alongside Arnold Schwarzenegger and in 2014, he voiced the character Leonardo in Teenage Mutant Ninja Turtles.

Returning to his roots, he co-wrote and starred in the outrageous action/comedy film Action Point (2018), playing a daredevil grandfather.