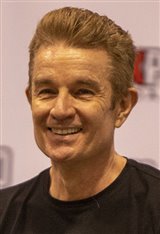 James Marsters was born in Greenville, California and graduated from Davis High School before attending New York's Julliard, the Pacific Conservatory of the Performing Arts and the American Conservatory Theater. It was at these schools he trained to become the versatile actor he is today.

After graduating, Marsters spent ten years producing and acting in over 70 plays before moving to Los Angeles to pursue a career in film and television.

His big break came in the role of platinum-blond vampire Spike, in the cult favorite television series Buffy the Vampire Slayer. The role of Spike was initially meant to only last for a few episodes, but Marsters' portrayal of the gothic vampire was an immediate hit with the show's rabid fan base. He was hugely popular and became the subject of hundreds of Internet fan websites. Marsters would go on to appear in 97 episodes of Buffy, as well as another 24 of the show's spin-off, Angel.

Marsters is also an accomplished musician who has played sold-out concerts in America, Canada and across Europe. In 2005 he released his first solo album, Civilized Man.