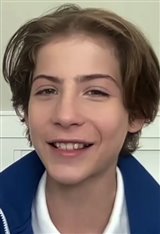 Born in Vancouver, British Columbia, Jacob Tremblay landed his first screen acting role at the age of six on an episode on the NBC TV series Motive, filmed in his hometown. Jacob made his feature film debut in The Smurfs 2 (2013), playing the role of Blue. He also played the lead in the short film The Magic Ferret in 2013. Jacob made a big spash in 2015, with starring roles in the horror film Before I Wake opposite Kate Bosworth and Thomas Jane and in the drama Room, opposite Brie Larson. Room... See All