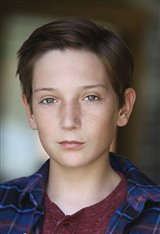 Born in San Diego, Jackson A. Dunn began acting in school plays at an early age, then at age 10, attended an open audition that led to a showcase in Los Angeles, where he was signed by an agent and manager. Soon after, he began landing roles on television, including a recurring role as Will on the hit Showtime series Shameless in 2015. He next landed a regular role as Elmer on the Nickelodeon series Legendary Dudas in 2016, then made his film debut in the indie film The Scene of Rain &... See All