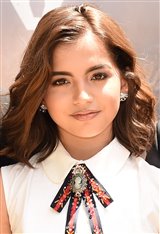 American singer and actress Isabela Moner was born in Cleveland, Ohio, the daughter of Katherine Moner, who is from Lima, Peru and Patrick Moner from Louisiana. Of her mixed descent, Isabela has said she considers herself more Peruvian than American. She is the middle child in her family and has two brothers.

Isabela dreamed of becoming an actress and a singer from an early age. She started acting when she was seven years old and made her Broadway debut at the age of ten in a revival of the musical Evita, in which she sang with Ricky Martin.

Next, Isabela broke into film with her first movie, The House That Jack Built (2013), in which she played a young Nadia. One year later, she earned a recurring role on the sitcom Growing Up Fisher, starring alongside J.K. Simmons.

Isabela continued to work onstage as well, appearing in productions of Zorro in the role of Young Lisa, Little Miss Sunshine as Rosa Maria, A Christmas Carol as Sarah Cratchit, the title role in the musical Annie and Young Cosette in Les Misérables.

She appeared in the comedy film Middle School: The Worst Years of My Life (2016) and starred in the Nickelodeon series 100 Things to Do Before High School in the role of CJ Martin. It was at this time that Isabela also released her debut album, Stopping Time.

She featured in two television movies in 2015 and 2016: Splitting Adam (2015) and Legends of the Hidden Temple (2016), before being called back to the big screen. Isabela played Izabella in Transformers: The Last Knight (2017) alongside Mark Wahlberg, which earned her a Teen Choice Award nomination for Choice Summer Movie Actress. She also lent her voice to the animated film The Nut Job 2: Nutty by Nature (2017), in which she voiced the character of Heather.

Isabela went on to play Isabela Reyes, the daughter of a notorious drug lord, in the action-crime thriller Sicario: Day of the Soldado (2018). She starred alongside Mark Walberg again in 2018, this time playing his foster daughter in Instant Family (2018). Most recently, Isabela took on the title role in the family adventure film, Dora and the Lost City of Gold (2019).

Isabela was homeschooled through Ohio Virtual Academy and was accepted into college when she was 15 years old. She has two brothers, Gyovanni and Jared. In her spare time she enjoys skiing, snowboarding, skating, and jumping on the trampoline. In addition to acting, she's a talented singer, songwriter and dancer and can play the ukulele.