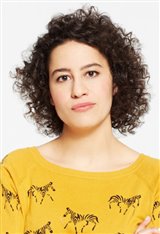 Ilana Glazer is an American actress, comedian, writer who was born in Long Island, New York. When she was young, her parents were very supportive of her wish to become an actress. Her dad gave her a video camera, and she used that to record sketches she’d written and directed with her older brother, Eliot. In 2006, she and Eliot began taking classes at the Upright Citizens Brigade Theatre. This is where she met her close friend and work-partner Abbi Jacobson. Although Ilana graduated from New York University in 2009 with a degree in psychology, her main love was still performing.

Along with Abbi, Ilana created, co-wrote and starred in the original web series Broad City, which earned her recognition. The show then debuted on Comedy Central in 2014, and generally well received with positive reviews and ratings. The show has become one of Comedy Central’s more popular series with a fourth and fifth season confirmed for 2017 and 2018. Ilana and Abbi also perform Broad City Live, a monthly live show at the Upright Citizens Brigade Theater in New York.

Ilana has made appearances on several other television shows such as BoJack Horseman, Lucas Bros Moving Co, and Inside Amy Schumer.

After appearing in a number of short films, she played a supporting role in the feature The Night Before (2015), starring Joseph Gordon-Levitt and Seth Rogen. Ilana then starred alongside Scarlett Johansson, Jillian Bell, Zoe Kravitz and Kate McKinnon in the raunchy comedy feature Rough Night (2017). The story is about five best friends from college who are enjoying a bachelorette party weekend in Miami.

On February 26, 2017, Ilana married her longtime boyfriend, David Rooklin, in a private ceremony.