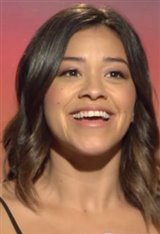 In 2014, Gina Rodriguez rose to fame with her breakout role in the groundbreaking dramedy series Jane the Virgin. Her work on the show earned her a Golden Globe, as well as a slew of opportunities in various big budget movies, including Deepwater Horizon (2016) and Annihilation (2016). Born in Chicago, Illinois, Gina is the youngest of three daughters to Catholic Puerto Rican parents, Genaro and Magali Rodriguez. She was raised in the Belmont Cragin neighborhood in the Northwest side of Chicago,... See All