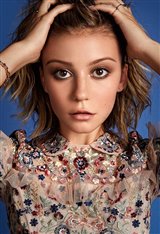 Genevieve Hannelius rose to stardom at a young age with recurring roles on the Disney Channel series Sonny With a Chance (2009 to 2010) and Good Luck Charlie (2010 to 2011) before landing a starring role as Avery Jennings on her own series, Dog with a Blog (2012 to 2015). Born in Boston, Massachusetts, Genevieve was raised in Maine, where she discovered a love of acting after she participated in school plays. She also starred the title role of the play Madeline's Rescue at age seven at... See All