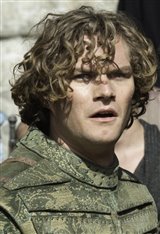 Finn Jones, born Terence “Terry” Jones, is a British actor best known for his role as Loras Tyrell in the HBO fantasy-drama series Game of Thrones. He was a Sixth Form student at Hayes School in Bromley, UK, before training in a three-year acting course at The Arts Educational Schools. He first began his professional acting career in Hollyoaks Later, a spinoff of a successful British soap opera. On June 19, 2010, it was announced that he would be appearing in Game of Thrones as the character... See All