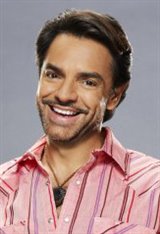 Born in Milpa Alta, Mexico, Eugenio Derbez is one of the most beloved and influential showbiz personalities in Mexico. Born to an actress and a publicist, he first appeared at age 12 on a telenovela as a background performer. However, he didn't begin acting classes until he was 19, after which he began acting professionally on stage. Eugenio made his Mexican television debut in 1981 and appeared on many series over the next few years. He made his feature film debut in Más vale amada que quemada... See All