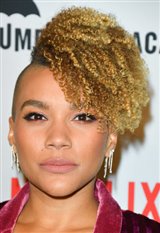 Born and raised in Norfolk, Virginia, Emmy Raver-Lampman first achieved success on stage in musicals. In 2005, she was the standby for the role of Elphaba for first national tour of Wicked. In 2010, she was a member of the Tribe for the national tour of Hair, then made her Broadway debut the following year with the production. Next came the national tour of Jekyll & Hyde in 2012, which went on to play on Broadway in 2013, and that same year, she joined the original Broadway production of A... See All