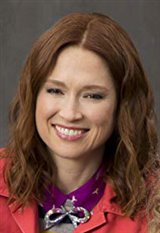 Elizabeth Claire Ellie Kemper is an American actress, comedian and writer. She has four siblings, including her older sister Carrie, who is a television writer. Ellie attended John Burroughs High School, where her drama teacher was Mad Men star, Jon Hamm. She later attended Princeton, where she played field hockey in her freshman year before quitting to concentrate on performing. She was also part of the improve comedy group Quipfire! and the musical theatre troupe the Princeton Triangle Club.... See All