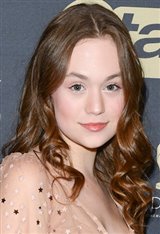 Born and raised in Toronto, Ella Ballentine began her career onstage, appearing in a production of The Railway Children in 2010 at Roundhouse Theatre.

She made her screen debut in the 2012 Hallmark TV movie, Baby's First Christmas.

Just two years later, Ella played a role in the motion picture The Captive, starring Ryan Reynolds and directed by Atom Egoyan. That was followed by a role in The Calling (2014), starring Susan Sarandon and Donald Sutherland.

In the 2016 feature Standoff, Ella starred as a little girl who becomes the target of a hitman (Laurence Fishburne) when she witnesses a killing. However, it was her role as Anne Shirley in the YTV movie Anne of Green Gables, alongside Martin Sheen as Matthew and Sara Botsford as Marilla, that earned Ella the most recognition.

She filmed two sequels and in 2018, won a Canadian Screen Award for her work as Anne Shirley in Anne of Green Gables: Fire & Dew (2017).

Ella, who is passionate about wildlife conservation, dedicates her spare time to championing the cause.