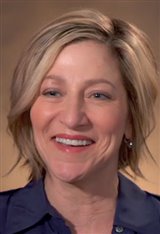 In perhaps her best-known role, actress Edie Falco played brash, assertive mob-boss matriarch Carmela Soprano on the hit TV series The Sopranos. Self-described as shy, Edie’s convincing portrayal is due in part to her prestigious background in acting. Hailing from Brooklyn, New York, Edie (Edith) attended the theater program at SUNY Purchase (State University of New York at Purchase), and was trained in acting at the renowned Conservatory of Theatre Arts and Film. After she graduated, she took... See All