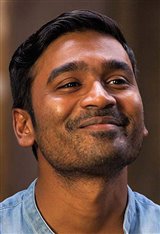 Born Venkatesh Prabhu in India, Dhanush is the son of Tamil film director/producer Kasthuri Raja, who cast Dhanush in his first film role in the coming-of-age film Thulluvadho Ilamai (2002). His follow-up film came in his brother Selvaraghavan’s directorial debut, Kadhal Kondein (2003), which won critical acclaim and was a commercial success. Over the next several years, Dhanush would see both highs and lows with his Tamil language films, such as Dreams (2004), Devathaiyai Kanden (2005),... See All