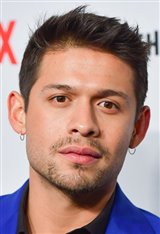 Born in Mexico, David Castañeda started acting at the age of 17, but was studying for a degree in civil engineering at Cal State University Fullerton when he began to be cast in guest roles on major hit series such as Lie to Me and Southland in 2009, as well as landing a role in the feature film Drive-By Chronicles: Sidewayz (2009).

He decided to pursue a degree in arts and convinced his parents to let him switch his studies to film production, graduating with a degree in 2014. In October 2013, while still a student, he was cast in a recurring role as nurse practitioner Jorge Castillo, one of Daphne's love interests, on ABC's Switched at Birth. Soon after, he was cast as Rogelio’s assistant Nicholas on the first season of The CW's hit series Jane the Virgin.

He continued to work steadily, landing the horror comedy feature Freaks of Nature(2015) alongside Keegan-Michael Key and Vanessa Hudgens and television appearances on the NBC series The Player (2015) and Blindspot (2016).

His first role in a major motion picture came soon after, playing the role of Hector opposite Benicio Del Toro and Josh Brolin in the sequel Sicario: Day of the Soldado (2018).

As soon as the the film was completed, David was cast as Diego on the Netflix series The Umbrella Academy, which debuted on the streaming service in 2019. He also plays roles in the Jean-Claude Van Damme drama We Die Young (2019), the Billy Crystal comedy Standing Up, Falling Down (2019), and the TV movie Roofers, which he not only stars in, but co-wrote and directed.