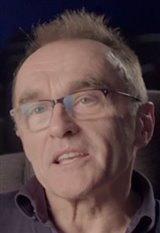 "As a director, your ultimate aim is to make something for the big screen, because it tests your craft more than any other way."

Born in Manchester, England, Danny Boyle grew up going to the cinema, but began his career in the theater. "When I was a kid I used to go to cinemas, and I was never in a theater until I was eighteen," he remembers. "Ironically, theater seemed a much easier and more accessible way of getting into the arts, so that's how I started." He first worked with the Joint Stock Theatre Company and then with the Royal Court Theatre Upstairs, where he became the Artistic Director from 1982 until 1985.

In 1985, he became the Deputy Director of the Royal Court Theatre, where he stayed until 1987. During the 1980s, Boyle also began directing for television, making TV films and serials such as Inspector Morse (1987) and Mr. Wroe's Virgins (1993).

Between 1994 and 1997, Boyle made his first three features films, all of which starred Ewan McGregor. He made his feature directorial debut with Shallow Grave in 1994. A stylish, darkly humorous psychological thriller set in a posh flat in Edinburgh's New Town, it was the first collaboration between director Boyle, producer Andrew Macdonald, and screenwriter John Hodge. Since this first feature, Boyle, Macdonald and Hodge, have worked together continuously through Macdonald's company, Figment.

Shallow Grave received strong reviews on both sides of the Atlantic and was a commercial success in Britain. Two years later, Boyle, Macdonald, and Hodge re-teamed to make Trainspotting (1996). An angry, darkly funny film about a group of Edinburgh heroin addicts that took a non-judgmental approach to drug use, the film won equal parts praise and controversy, as well as lasting fame for its director.

Boyle followed up Trainspotting in 1997 with another Hodge-Macdonald-McGregor collaboration, A Life Less Ordinary. A romantic comedy featuring karaoke and a pair of ferocious angels (Holly Hunter and Delroy Lindo), it starred McGregor and Cameron Diaz as mismatched lovers at odds with the law and each other. Despite the anticipation surrounding the film, it met with heavily mixed reviews and virtually dissipated at the box office.

That same year, Boyle served as executive producer for Twin Town, a surprisingly popular Welsh film that featured much of the rough-edged humor of Boyle's previous work. Boyle was offered the job to direct the fourth Alien movie, but he passed on it to instead make his own Alien Love Triangle. Despite top box office draws such as Kenneth Branagh, Heather Graham and Courtney Cox, the film sat on the shelf for years before finally being released. Boyle decided to make The Beach (2000), an adaptation of Alex Garland's acclaimed novel of the same name. Trading in McGregor for Leonardo DiCaprio, the film was shot in Thailand and told the story of a young American who encounters the darker side of human nature while backpacking through Asia. Boyle's next two films, Vacuuming Completely Nude in Paradise (2001) and Strumpet (2001) boasted no stars and disappointingly, never gained wide release. However, Boyle made a comeback with his next film, 28 Days Later (2003), winning an Empire Award for Best British Film.

His most critically-acclaimed film to date is Slumdog Millionaire (2008), which has won numerous awards, including Golden Globes and Academy Awards for Best Picture and Best Director. He's also won a Directors Guild Award for his work on the film.

His journey in cinema continued with the release of T2 Trainspotting (2017) — again with Ewan McGregor — and Yesterday (2019), a musical inspired by the songs of The Beatles.