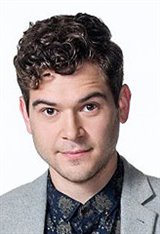 Originally from Regina, Saskatchewan, Daniel Maslany is a Canadian actor, best known for his portrayal of the quirky Detective Llewellyn Watts on the hit CBC series Murdoch Mysteries.

Daniel began his career as a child actor, making his film debut in the role of Peggy Lipton's son in the film Skipped Parts (2000), which also starred Drew Barrymore.

Some of his earliest television work includes playing Josh on the locally filmed TV series Renegadepress.com in 2004 and a teenager on several episodes from 2005 to 2007 of the popular sitcom Corner Gas, also filmed in Saskatchewan.

In 2008, he received the Emerging Artist Award at The Mayor's Arts Business Awards in Regina.

In 2013, Daniel presented his solo show, O.C. Dean, which he wrote and performed, at Globe Theatre in Regina. Also at the Globe Theatre, in 2015 he co-created and was the Sound and Video Designer for the multi-media project A Date with the Night, about an introverted woman who has trouble relating to the outside world.

He has also played many roles onstage onstage, with companies such as the Alberta Theatre Projects, Caravan Farm Theatre, Carousel Players, Persephone Theatre and 2b Theatre.

It was when Daniel moved to Toronto that his career took off in a big way. In 2016 he was cast in a starring role as Bondurant Smit, an eccentric young man from Manitoba who moves to Toronto on the CBC TV comedy series Four in the Morning. When the show was cancelled later that year, he was immediately cast in a semi-regular role as Detective Llewellyn Watts on the 10th season of Murdoch Mysteries, and je has been on the show ever since. During breaks from Murdoch Mysteries, he played a starring role as Townes Linderman, the autistic friend of the lead character Henrietta, from 2018 to 2019 on the sci-fi series Impulse, for YouTube Premium.

Following a role in the indie film Lie Exposed (2020), opposite Bruce Greenwood, he played the starring role in the short film The Mohel (2021), which debuted at the SXSW Film Festival.

Daniel is very close to his Emmy award-winning sister Tatiana Maslany (Orphan Black), who is three years older. They also have a younger brother, Michael, who is an animator.