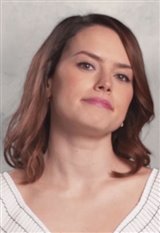 Guest roles on three more series quickly followed, including a two-episode stint on the TV series Silent Witness, before she was cast in a starring role in the new Star Wars movie - Star Wars: The Force Awakens in February 2014.

The news quickly hit the net and overnight, Daisy became a sensation. Since then, she's also completed a role in the indie horror Scrawl (2015). She then starred in The Eagle Huntress (2016) and Only Yesterday (2016). Daisy went on to reprise her role as Rey in Star Wars: Episode VIII (2017) and in Star Wars: The Rise of Skywalker (2019). She also starred in Murder on the Orient Express (2017) and provided the voice of a bunny named Cotton-Tail in Peter Rabbit (2018). In 2021, Daisy played Viola in the sci-fi thriller Chaos Walkingalongside fellow British actor Tom Holland.

Daisy lists her talents as singing, dancing, and playing the violin. In her spare time, she enjoys playing tennis, roller blading, and ice skating.