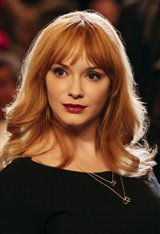 Christina Rene Hendricks was born in Knoxville, Tennessee. Her mother was a psychologist and her father, though born in Britain, worked for the United States Forest Service. She began acting at a very young age when her family moved to Twin Falls, Idaho, where she was raised. In Twin Falls, she started to act in children's musical theater productions. Her trademark red hair sets her apart, even though she was born a natural blonde. When Christina was just 10 years old, she colored her hair red after reading the classic Canadian childrens' novel Anne of Green Gables.

Though Christina started off in the industry as a model between the ages of 18 to 27, the actress is best-known for her role as feisty office manager Joan Holloway on the television series Mad Men. For her portrayal, Hendricks received two Emmy Award nominations in 2010 and 2011 for Outstanding Supporting Actress In A Drama Series. Prior to Mad Men, she made guest appearances on TV series such as ER, Firefly, Without a Trace and Body of Proof, not to mention a recurring role on Beggars and Choosers.

Her first TV movie was 1999's Sorority, but since then Christina has appeared in major motion picture releases with many A-list actors. She starred opposite Katherine Heigl and Josh Duhamel in Life as We Know It, Sarah Jessica Parker in I Don’t Know How She Does it (2011) and alongside Ryan Gosling in Drive (2011). She also worked with Bryan Cranston and Adrien Brody on the drama Detachment (2012).

Currently, she stars as Beth Boland in the Netflix comedy series Good Girls (2018).

In a 2010 poll of Esquire's female readers, Hendricks was named "Sexiest Woman in the World." She has been praised for her hour-glass figure, prompting comparisons to classic beauties like Marilyn Monroe and Veronica Lake. In 2009, the actress married actor Geoffrey Arend.