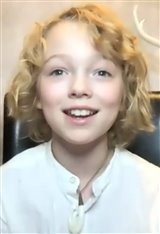 Christian Convery was raised in Vancouver, British Columbia and is a Canadian actor. He made his screen debut at the age of six in the TV movie Hearts of Spring (2016), and later that year he was featured on Supernatural (2016) as Lucas Kellinger. Christian also booked his first leading role as Cooper in the TV movie My Christmas Dream (2016). In 2017, Christian landed a recurring role on the FX series Legion, playing David at the age of four years. In 2018, Christian made his feature film debut... See All