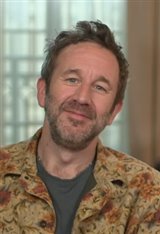 Born and raised in Ireland, Chris O'Dowd grew up with his mother, a psychotherapist and father, a graphic designer. He studied politics and sociology at University College, Dublin, but didn't finish his degree at the school. In 2011, he told Tribune, U.C.D.'s school newspaper, "The politics part of it was fine, but I was doing sociology as well and I could never bring myself to find an interest in it." After U.C.D., O'Dowd attended the London Academy of Music and Dramatic Art.

The Irish comedian is well-known for playing the nerdy technician Roy Trennerman on the British sitcom The IT Crowd. His breakthrough role in the U.S. came when he played Officer Nathan Rhodes in the hit comedy Bridesmaids. For his comedic performance in the movie, he also won an IFTA Award in 2012 for Best Supporting Actor.

O'Dowd has been in other Hollywood films such as Dinner for Schmucks with Steve Carrell, Paul Rudd and Zach Galifianakis and Friends with Kids, with his Bridesmaids co-stars Kristen Wiig and Maya Rudolph. He was joined by Paul Rudd and Megan Fox, in This is 40, the sequel to Knocked Up.

He starred alongside Bill Murray in St. Vincent (2014), and Miss Peregrine's Home for Peculiar Children (2016) opposite Eva Green and a talented cast of newcomers, including Asa Butterfield and Ella Purnell. In 2017, he had a role in Loving Vincent alongside Saoirse Ronan as well as a part in Molly's Game opposite Jessica Chastain. He also provided the voice of Shamus the Coachman in Mary Poppins Returns (2019).

Thanks to his work on the small screen, Chris has received three BAFTA TV Award nominations and in 2019, he won a Primetime Emmy for his work on the SundanceTV short series State of the Union.

Chris married Dawn O’Porter in 2012. They have two children.