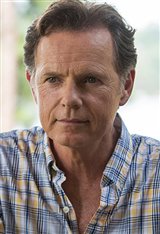 Canadian born Bruce Greenwood spent the first years of his life in Noranda, Quebec before moving to Princeton, New Jersey, then Washington D.C. and finally to Vancouver, British Columbia at age eleven. Bruce trained at the University of British Columbia and the American Academy of Dramatic Arts. After graduating, he landed bit roles in the feature films Bear Island (1980) and First Blood (1982). Before moving to L.A. to pursue an acting career, he spent a year touring as a singer/guitarist with... See All