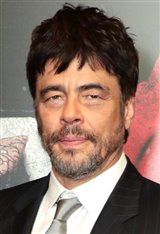 Puerto Rican-born Benicio Del Toro opted out of joining the family business. Born to parents who were both lawyers he received an understandably shocked reaction to his announcement that he wanted to act. "My family freaked when I told them I wanted to be an actor. It was like telling them I wanted to be an astronaut. On top of that, it was like saying that in order to be an astronaut, I was going to have to drive a cab in New York for five years," explains Del Toro.

When the actor was nine, his mother died and his father moved the family to a farm in Pennsylvania. Growing up he had planned to become a lawyer, he even enrolled in business studies at University of California in San Diego, but an acting class sparked a desire to perform. At this point Benicio dropped out of college and spent the next few years studying at the Circle in the Square Acting School in New York. Winning a scholarship to the famed Stella Adler Conservatory meant a move back to California. The move was fortuitous and resulted in his winning supporting roles in films and on television, however, his exotic good looks often got him cast as the drug-dealing bad guy in series such as Miami Vice.

Benicio's first feature film role was the less than impressive role of Duke the Dog-Faced Boy in the sequel film Big Top Pee-wee (1988). It wasn't exactly his breakthrough performance, or his proudest moment. Small roles in films followed, not all of them were widely seen or appreciated, but it was his supporting role in the film The Usual Suspects (1995) that finally got the actor noticed. As the mumbling crook Freddie Fenster, Del Toro stole every scene. He received the Independent Spirit Award (ISA) for Best Supporting Actor and was an honoree at the Puerto Rico International Film Festival. Good roles finally started to come his way and he took home another Independent Spirit Award the following year for his supporting role in Basquiat (1996).

A romantic leading man role in Excess Baggage (1997) gave Benicio the chance to expand his acting repetoire. He was hand-picked by the "IT" girl of the moment, Alicia Silverstone, to star with her in the film. The actor followed up with roles in offbeat films including Fear and Loathing in Las Vegas (1997) starring Johnny Depp, Snatch (2000) starring Brad Pitt, The Way of the Gun (2000) starring Ryan Phillippe, 2000's ensemble drama Traffic (for which he won a Golden Globe and an Oscar for Best Supporting Actor) about the drug world, and The Pledge (2001), written and directed by Sean Penn. In 2004, he received a second supporting actor Oscar nod, this time for his role as Jack, an ex-convict who has turned to religion to rebuild his life but may lose what he has gained in the wake of a terrible accident in 21 Grams (2003). In 2012, Benicio joined Oliver Stone's all-star cast for the film Savages, about two young men who face off against the Mexican drug cartel when their shared girlfriend is kidnapped. He also starred in Inherent Vice (2014), acted in Denis Villeneuve's Oscar-nominated action drama Sicario (2015) and voiced a part in the animated film The Little Prince (2015).

He played the key role of The Collector in the Marvel film, Guardians of the Galaxy (2014) and reprised it in the latest Marvel movie, Avengers: Infinity War (2018). To promote the Guardians of the Galaxy ride, Mission: Breakout at Disneyland's California Adventure Park, Benicio appeared as himself for the opening ceremony alongside his Guardian co-stars and director, James Gunn. He also reprises his role as Alejandro Gillick in the Sicario sequel, Sicario: Day of the Soldado (2018).

Benicio has been able to keep his private life fairly private, but has dated Chiara Mastroianni and Alicia Silverstone and was engaged to Valeria Golino.