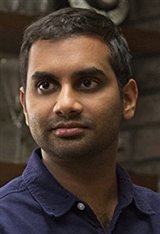 In 2005, Ansari collaborated with fellow comedians Paul Scheer and Rob Heubel to form the sketch group known as Human Giant. The following year Human Giant became a critically acclaimed MTV series, running for two seasons. The group was offered the opportunity to sign on for a third season but passed in order to pursue other opportunities.

Since then, Ansari has appeared in many television roles such as a fruit vendor on HBO's Flight of the Conchords and as Ed on the sitcom Scrubs. However, his most notable television role is as government employee Tom Haverford on NBC's Parks and Recreation. His performance on the show received countless praise from the media, including Entertainment Weekly, which named him one of 2009's "Breakout TV Stars."

In addition to his television performances, Ansari has also played supporting roles in films such as Observe and Report (2009) starring Seth Rogen and Anna Faris, I Love You, Man(2009) starring Paul Rudd and Jason Segel, Get Him to the Greek (2010) starring Jonah Hill and Russell Brand, and What's Your Number? (2011) starring Anna Faris and Chris Evans.

In addition to his television and film career, Ansari continues to perform stand-up comedy. In 2006, he won the Jury Award for "Best Stand-Up" at the U.S. Comedy Arts Festival in Colorado. In the fall of 2008, Ansari starred in his own comedy tour, which became the basis of his DVD/CD special for Comedy Central, titled Intimate Moments for a Sensual Evening.

Aziz voiced the character Squint in Ice Age: Continental Drift (2012) and the character Mub in the animated film Epic (2013). In 2012 he performed his third major tour of new material, entitled Buried Alive. In 2018, Aziz won his first Golden Globe, for his role as Dev in the comedy series Master of None.