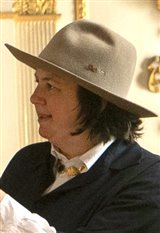 Autumn de Wilde was born in Woodstock, New York, to a family entrenched in '60s counterculture. Her father is Jerry de Wilde, a famous art and commercial photographer known for his work with Jimi Hendrix and Frank Zappa.

Autumn didn't always want to work with film. Her original dream was to be a dancer, studying ballet for years. She eventually went on to study theater at Los Angeles City College. But photography was in her blood.

She never went to school for it; instead her father taught her everything she knows. In an interview with T Magazine, Autumn credits her career to Beck. She was on the 1995 Lollapalooza tour when she took photos of him. He liked them and asked her to document him throughout his career.

She's gone on to photograph covers for many artists, including She & Him, the White Stripes, and New Found Glory, and has done portraits for several celebrities, including Ryan Adams, Willie Nelson and Sonic Youth. Her other work has been featured in the pages of Rolling Stone, Nylon, Entertainment Weekly and The New York Times.

Her entry into directing was simple. Her friend, singer-songwriter Elliott Smith, had asked her to direct the music video for his song "Son of Sam." She wasn’t sure she was experienced enough, but he was adamant she would be the one to direct. It was this that kicked off her career.

Soon, Autumn began creating short films, mostly for brands. She has been the unofficial go-to photographer for fashion label Rodarte, shooting their very first collection in 2005. She also has directed several short films for Prada, even winning a Clio for her 2018 series. It was that win that lead her to eventually make her feature film directorial debut with Emma. (2020), starring Anya Taylor-Joy.

Autumn is best known for her use of color in her work, which is also translated through her personal style. In an interview with The New Yorker, she described her style icons: “Oscar Wilde and Paddington Bear.”

She is divorced from drummer Aaron Sperske. They have one daughter together, Arrow, who is the lead singer for the L.A.-based band Starcrawler.