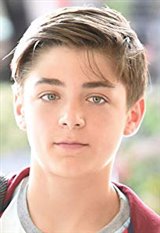 Born in Phoenix, Arizona, Asher Angel made his film debut at age five in role of Brad Jr. at 5 years in the feature Jolene (2008), starring Jessica Chastain, which was shot in Phoenix. His younger brother, Avi, played Brad Jr. as a baby.

Bitten by the acting bug, Asher began auditioning for stage productions and was cast as one of Fagin's boys at age seven in the musical Oliver! at the Desert Stages Theatre. He went on to appear in a number of plays and musicals at the same theatre over the next few years, including Seussical, Mary Poppins, The Little Mermaid and Into the Woods.

When Asher was 13, his mother took him, along with Avi and their younger sister London Bleu, to Los Angeles to audition for TV and movie roles. Asher landed guest appearances on the Nickelodeon series Nicky, Ricky, Dicky & Dawn and on the drama series Criminal Minds: Beyond Borders, both in 2016.

The following year, he was cast as handsome and popular kid Jonah Beck on the Disney Channel series Andi Mack, playing a boy Andi has a crush on. During his stint on the show, which ran for three seasons, he gained a large fan following. Asher and his family moved to Utah, where the series was filmed.

He appeared in the indie film Driven to Dance (2018) during hiatus from the show, and after Andi Mack concluded in 2018, Asher made his starring debut in a major motion picture in the role of Billy, a boy who turns into an adult superhero in Shazam! (2019).

Asher, who also sings and plays guitar, has released a number of singles, and is working on his first album.