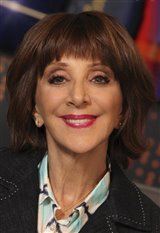 Andrea Martin is of Armenian descent. When her grandfather immigrated to the United States in the early 1900s from Ottoman, Turkey to Maine, he changed his last name from Papazian to Martin.

Born and raised in Portland, Maine, Andrea began performing at the age of four, entertaining patients in a pediatric ward. She also became involved with a local children's theater. As a teenager, she made her professional debut singing at Portland's annual Armenian Dance and Picnic. She moved to New York City after earning her degree from Emerson College and immediately landed a role as Lucy in a stage production of You're a Good Man, Charlie Brown.

Andrea relocated to Toronto, where one of her first jobs was a stage production of Godspell, alongside Martin Short and Gilda Radner. She also began appearing on Canadian TV shows such as The Hart & Lorne Terrific Hour, produced by and co-starring Lorne Michaels, who would go on to produce Saturday Night Live. Other television appearances included a guest shot on the CBC sitcom King of Kensington and a regular role on The David Steinberg Show.

In addition, she began landing parts in Canadian feature films such as Foxy Lady (1971), Cannibal Girls (1973) with Eugene Levy (for which she won an award as Best Actress at the Catalonian International Film Festival), and Black Christmas (1974).

In 1976, she teamed up again with Short and Levy, as well as other Canadian comedians such as John Candy, Catherine O'Hara and Dave Thomas for the TV sketch comedy series SCTV. The show was a huge hit not only in Canada, but in the United States as well, making stars out of the performers and earning Andrea and her co-writers two Emmys. The show ran until 1981, then picked up again for a new season from 1983 to 1984. Andrea moved back to the States to continue her film career with a role in Club Paradise (1986) alongside other SCTV alumni such as Levy, Moranis and Joe Flaherty.

She also played a role in Black Christmas (2006), a remake of one of her earliest films.

On television, she has been a guest star on series such as Kate & Allie, Star Trek: Deep Space Nine, Superman, Ed and Crossing Jordan. She has also been a regular on several TV series including The Carol Burnett Show, The Martin Short Show, Damon, George and Martha, Committed and My Big Fat Greek Life, Difficult People, Great News and The Good Fight.

Additionally, she has worked on the Broadway stage, winning a Tony award in 1992 for her role in My Favorite Year.

In 2018, she received a star on Canada's Walk of Fame in Toronto.

Andrea lives in New York City. She has two sons, Jack and Joe, from her former marriage to writer/director Bob Dolman.