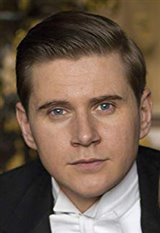 Born and raised in Killiney, Country Dublin in Ireland, Allen Leech is best known for his role as Tom Branson on the British TV series Downton Abbey.

Allen first became interested in acting at age 11 when he played the Cowardly Lion in a school production of The Wizard of Oz at St. Michael's College. At 16, he landed his first professional acting role in a production of A Streetcar Named Desire, starring Frances McDormand, at Dublin's Gate Theatre.

Shortly before he completed his studies at Trinity College, Dublin, where he went on to earn a Bachelor of Arts and Masters Degree in Drama and Theatre Studies, Allen landed his first starring onscreen role playing a flamboyant fashion student in the Irish film, Cowboys & Angels (2003). He then starred alongside Ruth Negga on the RTÉ limited TV series Love is a Drug (2004), playing the role of Shane Kirwan. For his work on the series, he was nominated for Best Actor in a Television Drama at the Irish Film and Television Awards.

A lead role in the Irish mini-series Legend followed in 2006, and in 2007, he played the role of Marcus Vipsanius Agrippa on the BBC/HBO Emmy-winning mini-series Rome.

By 2010, Allen was cast in the first season of the ITV series Downton Abbey, playing the Crawley family's chauffeur, Tom Branson, who falls in love with the youngest Crawley daughter, Lady Sybil. He remained with the show for all six seasons.

During his time on the show Allen made a number of appearances on the big screen, including the role of John Carincross opposite Benedict Cumberbatch in The Imitation Game and Queen frontman Freddie Mercury's boyfriend Paul Prenter in Bohemian Rhapsody.

Although Downton Abbey ended in 2015, four years later a sequel feature film hit theaters, with the same title — Downton Abbey (2019). In it, Allen's character Tom runs into a bit of trouble when the royal couple visit the castle, but he also finds a possible love interest.

Allen also appears on stage when time permits — in 2011, he played the role of Mick in the Mike Leigh play Ecstasy at London's Hampstead Theatre and in 2017, he played the lead role of Roland in Constellations opposite Ginnifer Goodwin at the Geffen Playhouse in Los Angeles.

Allen, who recently moved to Los Angeles after living in London for 12 years, married American actress Jessica Blair Herman on January 5, 2019. They are expecting their first child together.