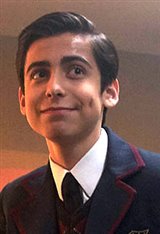 Aidan Gallagher is best known for playing Nicky Harper, one of four quadruplets on Nickelodeon’s Nicky, Ricky, Dicky & Dawn, and as Number Five on Netflix’s The Umbrella Academy.

Aidan displayed a creative touch at an early age, shooting live-action shorts and filming stop-motion Lego action videos. This led him to asking his father, who was in the industry, for help in getting on film sets to learn directing. His father got Aidan onto his friends' film sets, who wound up wanting to write him into their projects, leading to Aidan’s love for acting.

His first two acting gigs would be for two network pilots, a TV film starring Tyler Blackburn and an episode of Modern Family. He would follow that up with two more pilots in Jacked Up for CBS and Happy Madison Productions, led by Patrick Warburton and Nickelodeon’s Nicky, Ricky, Dicky and Dawn, the latter of which was picked up.

The show would go on to be a huge success during its four season run, with Aidan twice nominated for Favorite Male TV Star by the Kids Choice Awards. However, the show was cancelled after one of the lead actors left the show, but it paved the way for Aidan to land a starring role on Netflix’s new series, The Umbrella Academy, which began shooting in early 2018 in Toronto.

Aidan decided to become a vegan at age 12 and has been a huge advocate and ambassador for several environmental organizations. In June 2018 he became the youngest ever ambassador for the United Nations as a UN Goodwill Ambassador for North America focusing on youth outreach.

In the following months he would speak at the Global Climate Summit for Governor Jerry Brown in San Francisco, meet with United Nations leaders at the UN Headquarters in New York, and be invited by Prince William and the U.K. Government to host the Summit on Illegal Wildlife Trade in London and introduce the Duke of Cambridge to the stage.

Aidan is also currently working on his first music album as a solo artist with plans for a world tour in between seasons of The Umbrella Academy, which debuted on Netflix in February 2019.