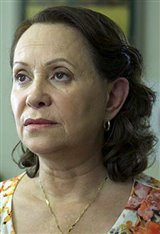 Born and raised in Mexico, Adriana Barraza had never acted in an English language production when she was chosen to play a supporting role in Babel (2006), starring Brad Pitt and Cate Blanchett. Playing an illegal immigrant who's the nanny of two American children, Barraza received critical acclaim for her performance, including a San Francisco Film Critics Circle award for Best Supporting Actress and Golden Globe and Academy Award nominations. A popular television actress since 1993, Barraza's... See All